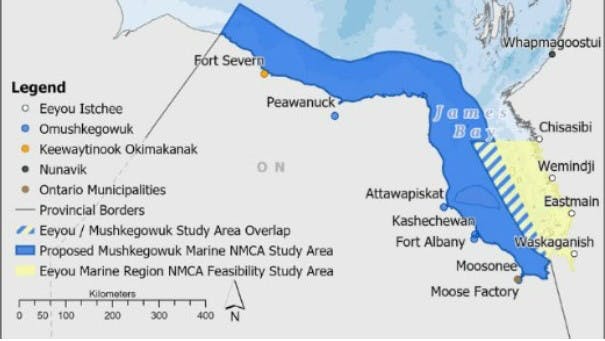 The Mushkegowuk Council represents 7 First Nations: Attawapiskat, Kashechewan, Fort Albany, Moose Cree, Chapleau Cree, Taykwa Tagamou, and Missanabie Cree. The first four First Nations’ traditional territories are extensive and cover carbon rich wetlands and globally significant watersheds and that flow into James Bay (including the Attawapiskat, Albany, Ekwan, Moose rivers) and include extensive areas of Hudson Bay and James Bay. The Council often works cooperatively with two First Nation, Weenusk (Peawanuck) and Fort Severn situated further north on Southwestern Hudson Bay. The Mushkegowuk Council can trace its origins back to the late 1970’s. At that time, the Chiefs of the James Bay communities formed what was known as the James Bay Tribal Council to work together in addressing common concerns. In the early 80’s, the organization was renamed Mushkego Cree Council. In 1984, the council became Federal incorporated and shortly thereafter, during an assembly in Kashechewan, it was again renamed to what it is known as today, Mushkegowuk Council.

According to a soon to be published WWF Canada report, James Bay is one of the most productive marine areas in the Arctic. It is a unique ecosystem owing to high inputs of fresh water and relative shallowness. Weeneebayko (James Bay) has supported the Omushkego (the “People”) since time immemorial. The area is critically important for biodiversity including the most southern population of polar bears, a unique year-round population of beluga whales and more than 170 species of geese, ducks and shorebirds, millions of which make use of the region during their migrations. James Bay is fed by many important rivers. On the Quebec side, many of the rivers have been dammed. This is not the case in the Mushkegowuk territory which is home to some of the most important remaining wild rivers on the planet. The placement of the proposed Western James Bay and Southwestern Hudson Bay NMCA is also important for the health of the Hudson Bay complex owing to the ocean currents.

Currently, there are no specific marine protections in Eastern James Bay and Southwestern Hudson Bay. An NMCA in the area would be complementary to existing efforts to create marine protection Eastern James Bay and further north in Southwestern Hudson Bay. Additional, but smaller conservation efforts are also taking place further northeast in the Belcher Islands as well as in the Ottawa Islands.