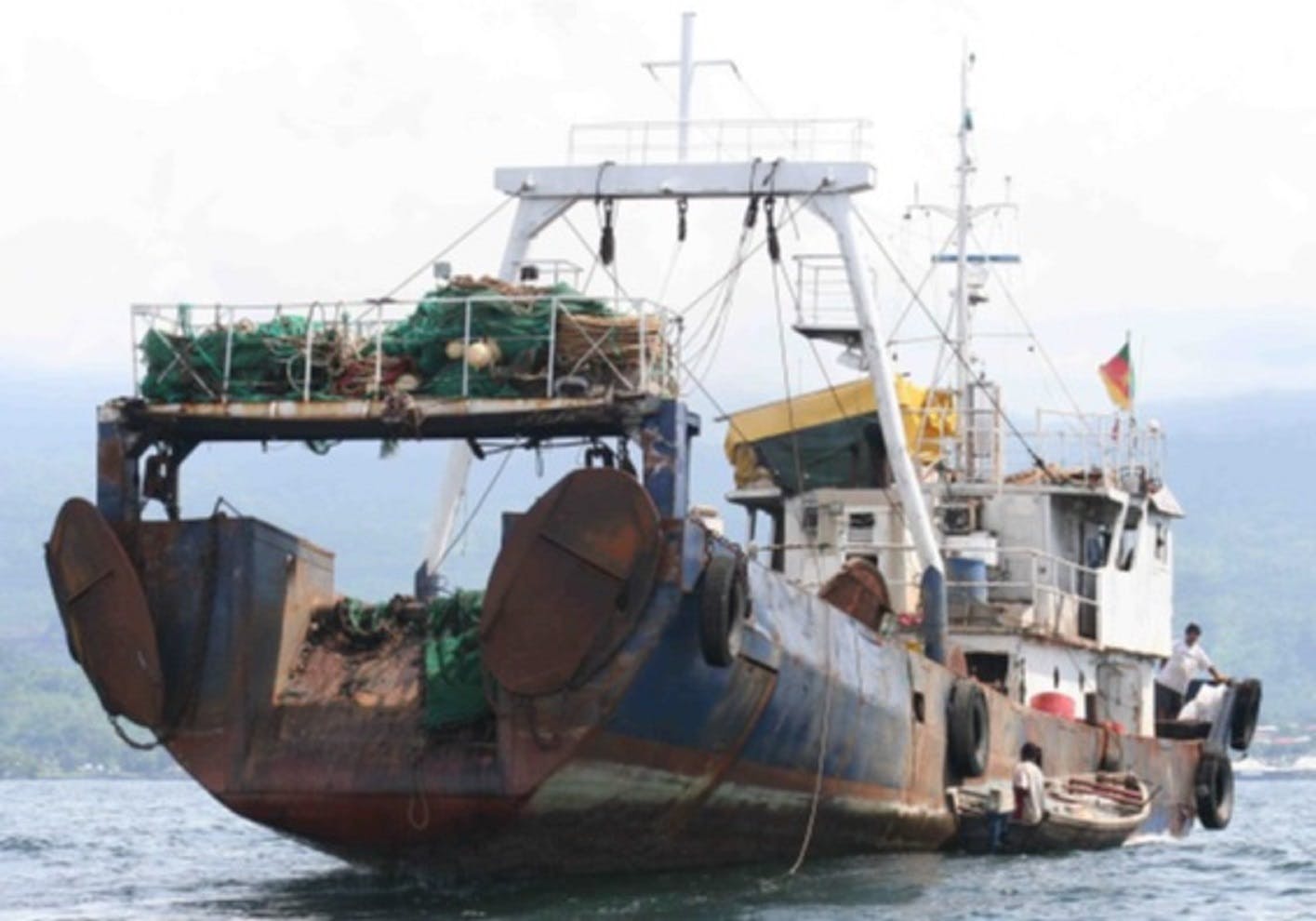 Protected Areas and Transparency in Cameroon

A trawler with a Cameroonian flag moored near shore

The project entitled “Supporting effective management and community surveillance in the Douala-Edea (marine section c10% EEZ) MPA, and advocacy campaigns to end destructive industrial fishing in Cameroon (in MPAs, territorial seas and beyond)” will take place within Douala-Edea marine and terrestrial landscape with the marine section covering approximately 10% EEZ enclosed by 4 Cameroon largest rivers estuaries (Wouri, Dibamba, Sanaga and Nyong) over 100 km of coast, over 40 000 ha of Cameroon mangroves with human population of more than 20 000 people mostly artisanal and semi-industrial fishers around it in some 40 villages and fishing camps.

Fisheries resources and habitats are currently threatened by large-scale industrial that do not respect regulatory fishing territories (entering artisanal fishing zones within 2 nautical miles) and mesh sizes thus sweeping every fish in their nets including endangered marine species (sea turtles, manatees) in which at least 1,200 individuals and 290 of other species are captured yearly (Ayissi and Jiofack, 2014) and even dumped on coast lines thereby compromising the future of fisheries and livelihoods of large coastal communities that depend on the fishing as fishers lament https://fcwc-fish.org/other-news/cameroon-chinese-fishers-going-off-with-cameroon-s-catch, Beseng, 2019; Beseng 2021).

The project will consist of Supporting effective management of the Douala-Edea marine and terrestrial national park to address illegal fishing and exploitation of marine natural resources, Sensitizing and generating awareness of stakeholder’s on existing laws and regulation in other to fight against large-scale industrial interest in destructive fishing in the area and Strengthening Cameroon marine and Mangrove Network with wide organizational and action coverage of Cameroon coast for effective advocacy campaigns to deliver required policy outcomes to end destructive industrial fishing in the entire Cameroon (in MPAs, territorial seas and beyond) and also the enhance the implementation of IUU laws and regulations to which Cameroon is a signatory.

The execution of this project will contribute to 10% of Cameroon EEZ put under effectively managed MPA beefed up by efficient marine surveillance systems through reinforcing government joint anti-poaching missions of naval and conservation services operations with local participation with the reduction of reported cases of industrial fishing and illegal activities to less than 10% as evidenced from surveillance reports. The project execution will also contribute to the awareness of at least 60% of the local population and their full cooperation in the eradication of IUU. Finally the project will contribute to the production of several policy recommendations and actions including medial reports to trigger enforcement. At the political level, the project will contribute to the management directive on protective areas and the country enlistment into the global 30 by 30 initiative.