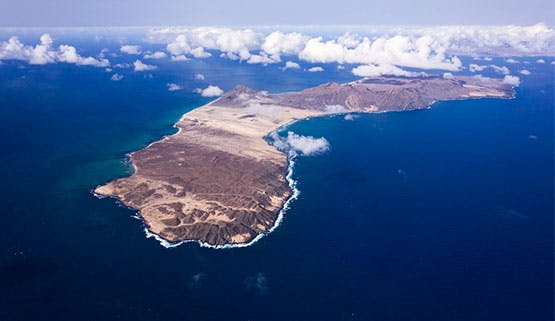 Cape Verde is an archipelagic nation formed by 10 islands located 500 km west of Senegal in West Africa. Discovered in the 15th century by the Portuguese, it has since served as an important slave warehouse between Africa and the Americas due to its strategic geographical positioning. Independent since 1975, its oceanic territory with about 1,000,000 km2 has a fantastic wealth of local species, in addition to being on the migration route of megafauna such as whales, sharks, turtles, sea birds and schools of fish. At the time of major fishing agreements with European, African and Asian fleets, its ocean has systematically suffered from fishing pressure that puts the balance in its surrounding seas at risk, which strengthens the urgent need to create legal tools for safeguarding its unique fauna.

This project “Strengthening the establishment, monitoring and management of the Cape Verde Marine Protected Areas Network” meets the need for a conservation sanctuary that creates a safe corridor for both migrant species and local biological wealth. In this sense, we launched the challenge of strengthening the national network of marine protected areas, as well as proposing the creation of new areas with larger dimensions and innovative management forms that include local populations in a participatory and inclusive management.